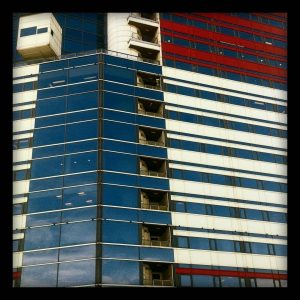 You’d think they’d have thought of a way to make it bearable when the lifts went on strike.
Especially since the lifts *always* went on strike, these days. The latest reviews of their coreware had made it so their new sentient state did not work well with their functions anymore.
The building was filled with offices. Only offices. For what it was worth, it might as well have been abandoned. There were only empty souls working for empty causes here. The only lively thing in there were the machines.
The spiralling stairs gave him such a headache he had to stop every two floors to try and catch a breath of the city’s trademarked Refreshened™ air.
This was new. The system was just being tried here before it got expanded over the whole continent.
« Refreshened™ air, learn how to breathe again! Now with twice as much oxygen as before. »
Truth be told, people were starting to get a little high on oxygen now. But they were working faster for sure, almost as fast as machines. That was the point of it all, wasn’t it?
He gasped, his hands cluched on the bar of the small balcony. Floor 24. He had just reached the grey area — not a living person here. Still 18 floors to go before he reached the red area, where machines delt with human resources.
He wouldn’t be on time for his appointment. He would probably miss his opportunity on getting the job.
But now he was inside the building, he wasn’t so sure he really wanted it. The humming of the machines in the grey area made him think twice. They would be his new bosses and the more he thought of it, the worse it sounded.
« Hey. Fancy a lift? »
He jumped and almost fell over. Twenty-four floors high…
His heart racing, he tightened his grasp on the bar and tilted his head up.
A few feet above, a young boy was looking at him cheekily, perched above a giant clockwork dragonfly.
He felt his heart stop.
« Don’t worry. This one’s tame. So, you want to get higher? Come on. The lifts have been on strike for two weeks now. »
Two weeks was a really long time, machine-wise. It was surprising they had not fixed it yet.
« They won’t fix it. They don’t want the lift to go up anymore. They don’t like it at the top of the building. »
But he had his appointment on the…
« They do it to eliminate those who can’t work with machines…and to make sure noone goes further. If you walk up, you’re using the resources they give you well. It makes you a really good candidates. And you’re tired enough when you reach the right floor, so you don’t try and look what’s up there. »
Up there?
« We are Dragonfly-tamers. It was not that hard to tame them actually. The machines made it so we were terrified of them, because they were wild. Sentient and wild. But us tamers… We are the only one who listened to them. And now we live with them. Up there. »
He looked up. He was only 18 floors away from the appointment…already late for it. Machines didn’t like it when people were late.
The top of the building was almost thirty floors away. A blue area drowned into an artificial blue sky. And real living, breathing people up there, higher than Refreshened™ air, along with wild machines.
« Maybe I could use a lift if there’s room, yes. »