The Tower Saga was written for 2015 Ray’s Day. Not long before leaving for Sweden, I had announced that I would take part in it by sending postcards with short stories written behind them.

Anyone giving me their address would thus get a postcard. And this is how I found myself writing a LOT during that specific trip.

The day before leaving, I had about 10 people requesting a story. Nothing I couldn’t do. I started discussing it with Rain (who was hosting me at that time)… I don’t really remember how we started talking about Nathaniel Trimfire, a newly made-up cowardish explorer, but the idea of such a character really appealed to me, and Rain didn’t seem to think very high of it. I thus made the bet to tell him the story of Nathaniel Trimfire by sending a postcard in every city I visited. Five postcards, in the end.

This is how I started to have the idea of spatial exploration: Rain is very keen on the topic, and it made me think of Ray Bradbury’s amazing Martian Chronicles. Nathaniel Trimfire would be a spatial explorer… maybe. And here is the point when I started considering that all the short stories I was to write could be set in the same universe, although all of them would work independantly.
It only meant that I would have to create a complete universe in less than 10 days. Surely, it couldn’t be that hard?

I thought about it for a while, then started up during my first train trip. When I arrived in Lille, I was already quite set on a good storyline. I had the beginning of Nathaniel Trimfire’s story (who, considering how HOT it was in the train, had decided that he really hated the sun). A trivial starting point, but a good one, and then I got further in the story. 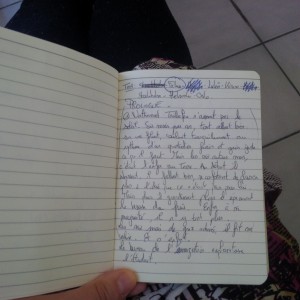 First part of Trimfire, written between Paris and Lille.

I then decided that… Things would happen, although I didn’t know what. I just jammed some random sentences on the paper. I am one of those creative gardeners : text, lots of text, and then you cut through it or build bridges between some written parts.
This is what happened. 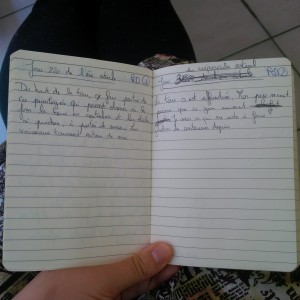 Starting fifty stories, not finishing any, keeping only what is of interest.

What was of interest, in that case, was the idea of a Tower that came back here and there and thus became the central point of the stories. I initially imagined a character watching the planets getting further from each others, from the top of a Tower that defied the laws of physics. I then looked for a way to make such a story credible. The notion of « Astral era » came quite early in my mind. It sounded right. I kept it.

From that point, I tried to write down a plan, where the Tower was the main character and went through various steps of the evolution of life on Earth. 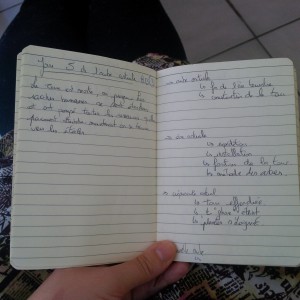 So I had a chronology, some landmarks, events that could help me shape the story. The only things I needed were characters and situations coming from the general outline.
A Tower: someone had to take the decision to build it. Then she had to get constructed. Then she could be unveiled. Then she’d be used as a lighthouse from space. Then she could be destroyed.
When I got on the plane, I had the idea of a misanthropist woman who’d have her private mansion built in the airs. This became « News from the outside ». It didn’t take long to write the short story, a mere trip from Paris to Stockholm. I thus decided to keep some characters that would go from one story to another. I kept Mari.
In the train for Falun, Nathaniel Trimfire went on with his exploration, although I didn’t really know what he would do at that time. In Falun, I found postcards with big sunflowers on them (my favourite flowers), and more inspiration ensued: Lily was born.
I kept all of this in my head and often discussed the stories with Hime during the whole trip. The only fact that I could talk about it really helped me in establishing links between the characters, although they weren’t all from the same Era. The Tower, the Underground, the Exploration… Everything developed slowly. But it remained in my head.

As you may have understood, I spent a lot of time writing. That was my way to take a break, to contrast with everyday « running everywhere, seeing everything, doing as much as I can ». I did that with Twitter too, sitting at one place for some time and focusing on only one task: either communicating with my people (Twitter) or communicating with myself (writing). Most of the time, when I was doing this, Hime was reading.

I mostly wrote postcards for my friends and family from Sweden. I only completed three short stories:  Catching the Transmission, written as my fingers followed the keys of the typewriter, News from the Outside, with Mari, and Trimfire, the story of Nathaniel Trimfire who started all of this. Everything else remained in my head

When I reached Finland, I decided to take a calmer rythm and allowed myself more free time to write. That’s when I managed to finish writing postcards for my friends/family and started to get a clearer idea on my short stories. 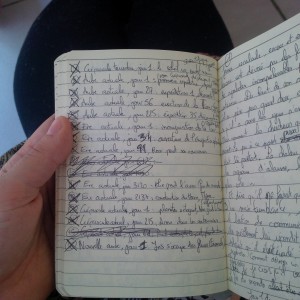 That was the plan : a date from an Era, the name of a character, an event linked with the Tower of with a change in Eras. The universe was building itself.

Once all the roots of the stories had been decided, I finally got to writing the stories. I wrote everywhere: beside the sea, in the common room of the hostel I stayed at, in a café, on a hill, in my bed before sleeping… Everytime I needed a 15-minute break, I started writing. Every short story was written first sentence first, last sentence second, and then everything that came in between. With texts of that length, it wasn’t a problem to use this method.

In the end, I wrote thirteen micro-short stories, that sometimes sounded a bit the same (it’s not an easy task to write down thriteen totally different stories in such a short amount of time, especilly if you take into consideration the constraints of time and universe I had chosen) and two longer short stories (one in five episodes, one that could be read in one sitting) in this universe. I don’t know if I’ll write about the Tower again, but I quite enjoy it, so I keep it just in case.

And I’ll be glad to lend this Universe to anyone who feels like writing about it, of course.

So, here is how this Tower Saga was born. Definitely not a revolution in the genre of science-fiction, but it allowed me to get back to writing whenever I felt like it and to travel even further than the places I saw during the trip (although those were already pretty amazing). I think I will keep on writing « on the go »: it is definitely something that works really well with me.

Now that everyone has received their postcards, I can post the texts on the Internet. I really hope you will enjoy those stories built around the Tower! 🙂

Go to Trimfire.
Go to News from the Outside.
Go to the micro-stories from the postcards.